Melodifestivalen got off to a rocky start last week, as Sweden started its task of selecting a successor to Loreen, ahead of the first Eurovision Song Contest held in Sweden since 2000. Another eight songs were performed, two of which were voted into the final, while another two got a second chance at the Andra Chansen show in 3 weeks. I think all-in-all it was a better selection this week, as the contest hit Gothenburg’s huge Scandinavium. But did Sweden make good choices?

Is that some more generic dancepop I hear? You betcha, and a small figure wanders through the smoke – a smily mix of Eric Saade, Justin Bieber and a wind machine. There’s nothing really new to this, it’s as generic as you like, but he’s a decent performer. OK his vocals get away from him a little during the frantic dance routine, but he pulls it all off.

The only real stumbling block is that the song is pretty boring. Sure, it has all the beeps and swizzles that you want from Electropop, but that chorus just doesn’t have anything to it. It just makes me excited for his inevitable return next year with a hopefully better song.

Felicia Olsson – Make me no 1

*fingersnap*, it’s a sassy plus-sized chanteuse, with an Adele-ified pouting bottom lip. So far, so standard. But ooh that’s an unusual chorus, it’s played up a lot by the lights and slightly clunky lyrics “*beat* PART TIME GIRLFRIEND”.

It conjures up memories of Maria thingy from Norway a few years ago, but never quite reaches those heights. They try their best with a big note and some pyro, but while this is perfectly nice, I was never QUITE on board.

Eek, what is that? The hairier face of Swedish music lumbers in for a turn this time, with a slightly off-key first verse, some really ropey styling, and a totally unengaging (and slightly unsettling) performance.

Why does he keep making those creepy eyes at the camera? Ack! The best bits are where everyone is singing, and drowning him out. No amount of three-way ‘rocking out’ exhibitions will help this, like some folk-music version of Soggy Biscuit. No THANKS

Swedish House Wives – On top of the world

The great buzz act of the night, a supergroup of former Schlager queens Hanna Hedlund, Jenny Silver and Pernilla Wahlgren. The last great G:son-penned hope for melodramatic Swedophiles everywhere. People where slipping into gay comas all over when the previews first surfaced.

But then it didn’t qualify, and suddenly it was simultaneously a bad song and also a martyr against Melodifestivalen’s shunning of a particular brand of Swedish cheese. Sigh.

Well it certainly had all the look of a modern Schlager anthem (whatever that means, it’s a genre that seems perpetually stuck in the past), and it was lent some modern relevance by the wholesale ripping-off of the chorus to Gaga’s “Edge of Glory”. Vocals were iffy too, but despite all this, and its iffy delivery, it was a lot more fun than at least half of the songs in this heat, so I’m sad it didn’t get any further.

Middle of the road love song now, courtesy of two gorgeous swedes. It’s total cheese, and the doe-eyed acoustic guy has been done at Eurovision quite a lot recently, but they both sing well. Tone is so pretty…

It’s a bit country, and that chorus keeps reminding me of “My Girl”, but it’s a sweet song. I was secretly gunning for this to make it through to the final as a counterpoint to some of the electropop already filling up the roster. Not a winner realy, but lovely all the same.

Louise Hoffsten – Only the dead fish follow the stream

WHAT a title! A real old-fashioned track as well, like old Fleetwood Mac or something. It’s such a strange choice for a show like Melodifestivalen, I guess I’m used to the occasionally folky act, and acoustic stuff, but this feels like it’s from another decade. It’s grown on me actually, even if Louise seems a little uncomfortable in this contest.

I gather she’s quite a famous blues singer in Sweden, so it’s a bit of a curveball, but I’ve heard worse songs. Rather like that harmonica bit too!

Ack, folky ballad time now, with Rikard performing as the ghost of Andrew Lloyd Webber. He’s got quite a nice voice, and for reasons that escape me (I don’t know Swedish), he seems quite emotional. The family photos projected on the piano probably have something to do with it, but it’s lost on me.

The song just flatlines though, the instrumentation is nice, but this just isn’t my tastes, and I’ll just leave it to the oldies to appreciate. 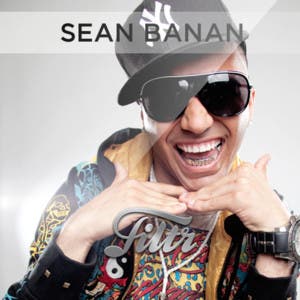 After making it to Andra Chansen last year, Sean’s back with more novelty rap-dance-pop. Again all in Swedish, and seemingly exclusively for Swedish audiences judging by the number of Melodifestivalen references jammed into it. It’s a bombastic affair involving various stages of stripping, tacky outfits, props, jokes about Turks, and a ridiculous angel set-piece.

Totally OTT, and had a bit of an advantage over everyone else with the massive budget it seemed to have. The song itself only really works for me at the chorus, which is catchy in the most basic of levels. It will be a disaster if this makes it to the stage in Malmö though!

——-
So after all that, what happened? With a sad inevitability Sean Banan made it to the final, and astonishingly he was joined by Louise Hoffsten with her dead fish song. God knows what was in the Swedish water that day (though it presumably killed the fish).

Andre Chansen got two more chancers, in the shape of the Erik & Tone duo and twinky Anton. A shame for the Housewives, but I guess the other two had the better chance outside Melodifestivalen. Not really the result people were perhaps looking for, or expecting, but it’s still early days, with 16 more songs to come. Not sure I’ve heard a winner yet though…