Oh now how can you say I don’t give you what you want? After all the effort I spend writing posts on this blog, all most of you want to do is look at mucky pictures of singers. And why not? I don’t hold it against you, I might go and do that right now. But first, in honour of the first Men of Malmö post, here’s a second portion. I fear I used most of the best ones on the first post, so look at that too! I’ve got loads of the Baku guys too, if you’re good…

END_OF_DOCUMENT_TOKEN_TO_BE_REPLACED

The Men of Malmö 2013 (a.k.a. shameless bait for Google searches)

Oh don’t pretend, I know what some of you are after. After all, I could hardly ignore the several hundred search hits for “Ott Lepland penis” and similar terms after last year’s contest. So I thought, why not just pull out all the stops and just give you what you want. Don’t worry, I’ve taken the burden of searching for all this stuff for you, no need to worry.

If you’re interested in the music of Eurovision or Melodifestivalen of course, please read my blog. Click Malmö 2013, Baku 2012 or just plain old ESC for hubs to all sorts of reviews, as well as the other page tabs at the top to find everything else. Have fun! Click the thumbnails to enlarge.

END_OF_DOCUMENT_TOKEN_TO_BE_REPLACED

Another week, another city as Melodifestivalen rolls into… Skellefteå. Yeah I’ve never heard of it, but Wikipedia helpfully tells me it’s a small city in the north of Sweden.

I wonder how they decide these host towns, it’s a bit of a mishmash of the biggest towns in Sweden and these random places. Skellefteå has a population of around 32,000, about a sixth of my home town, and yet I could never imagine any kind of national television event coming from here!

Well anyway, we’ve got another 8 hopefuls looking for one of those two tickets to the Friends Arena in Stockholm in three weeks time. It’s been a real bugger trying to find Melodifestivalen songs online this time, so I’m going to use SVT’s catchup player to watch the whole show. Let’s go!

Well, not after a skit about Italy’s apparently hate for Loreen’s Eurovision-winning smash. The motivation being that Italy were the only country not to give Sweden points. Sadly I have no idea what the conclusion was. Let’s GO AGAIN! FOR REAL!

I’d only heard of Eddie after seeing some astonishingly attractive photos of him. So he’s automatically my favourite (so shallow). And he’s gay! And he’s a popstar too! Or as much as you can be with a generic dance-pop track by the team behind Euphoria. His vocals aren’t amazing, with a lot of the work done by a backing crowd on the choruses.

It’s not really reinventing the wheel is it? He’s got great confidence and he’s a more believable performer than some I’ve seen this season, but maybe without the moves to keep up with the likes of David Lindgren and Anton whats-his-name. Lose the earring, and most of the clothes, and we’ll talk.

What a pretty lady, looking a bit awkward on her intro catwalk moment, I’m not surprised, it’s a strange feature! Yoo-hoooo! Uh-oh, singer songwriter with a guitar. Fortunately this is at least twice as good as Anna Bergendahl’s infamous MF winner in 2010.

Not a lot to is, but it’s a gorgeously laid-back song with that sort of Jason Mraz undertones to it. I wonder if it will get people to vote, but it’ll be no tragedy if they do.

Oh lord, who are these old farts? I never quite understand why these sort of acts are in Melodifestivalen. I’m all for variety, but if it’s a Eurovision selection show, it seems odd to have so many songs that would never be selected.

Maybe it’s just there to get the swedophiles all upset that whatever beloved female act might not qualify because of them. Playing it old-school with some quite catchy folk-music vibes. At least it’s catchy enough to get through the three minutes, and their voices are rough but strong. Just please don’t qualify…

Why does Danny seem to surprised to announce her name? Christ, those writers look a state. I like her though, a bit of a cringey attention-seeker, but let’s reserve judgement. Mirrors? Disco knuckle-dusters?

Its hard to tell she’s actually singing English sometimes. After some mirror-play, the rockier sound of the song emerges. Her vocals really aren’t that hot. It feels like the chorus is pretty good, but she’s just not great live. Still, it’s more like a Eurovision entry than I expected. Like those host-nation entries that do decently but aren’t out for victory.

Martin Rolinski – In and out of love 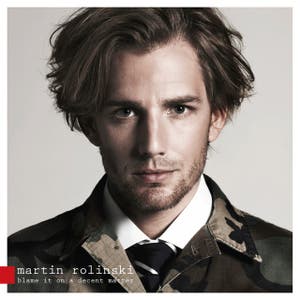 Oh another cute guy, at least that’s one aspect this year’s Melodifestivalen hasn’t fallen short on. Did G:Son write most of these songs? More power pop and HANG ON, isn’t that the guy from BWO?! I love that guy. Sounds just like it anyway.

YEAH this is much more like it. Solo song or not, it’s just more BWO music isn’t it? Props provided by a perspex prison and a load of paint. It’s not an exceptional song, but it’s more my thing than anything else in this heat and he’s a good performer with the best voice so far, even if the props feel like a bit of a cover-up – but for what? It seems like he’s got it all right.

I’ve heard her name before when I was reviewing that Absolute Schlager CD, and I think she’s a returning finalist from some time ago. I didn’t like that song, now Gina’s reminded me. Ugh, why is she dressed like Iggy Pop? She reminds me of someone’s aunt that isn’t quite acting her age. Or like my aunt.

She doesn’t seem kitted out to sing a ballad, but that’s what she’s doing. I can’t stop thinking about Iggy Pop now. Vocals are a bit breathy, and I wish she wouldn’t keep pointing like she’s yelling at us. If I couldn’t hear the music I’d think it was a punky rock song from the outfit and movements.

It’s a decent but unextraordinary ballad, and I feel like I’m missing out on more than normal by not knowing Swedish. I like the lookalikes on stage, no idea how it relates to the song, but it’s a nice idea. Just get a different stylist if you qualify, PLEASE!

The act’s name sounds a bit “gay interest”, but apparently that’s way off. Great, alt-rock, just what I need! Oh lord, maybe not, this sounds a bit emo-ballad with more bad stylists (Anita Dobson on synths). I bet the lead singer’s glasses only have plain lenses.

It’s a pretty generic song, but it’s quite nice. I could imagine it soundtracking an emotional make-out scene on One Tree Hill. It climaxes pretty well, even though the “put your favourite dress on girl, cos im gonna rock your world” is a pretty awful lyric. It’s a little dusty but contemporary. Quite nice really!

Let’s wrap this up now, and what a catsuit, did they have to paint that on? Very pretty anyway, and singing Swedish pop! It still exists! And it sounds like Agnes, was she not available? Like the silk curtain backdrop.

She gives it plenty with the dance routine, certainly. It’s catchy but I don’t know what it’s missing, it just feels a bit forgettable. I don’t understand, I do rather like it. I imagine I’ll love this when I hear it a lot more. I’d be happy with this as a Eurovision entry though, it’s modern and pretty awesome. She makes me think Charlotte Perrelli’s had some sort of Doctor Who-style regeneration. Not a bad thing.

So that’s a bit more of a poptastic effort, which is better for me. But overall I think the quality was pretty good. Eddie was a bit disappointing but he’s still super-hot. I don’t think we’ve heard the MF winner yet (cutting it a bit fine), but I’d at least be happy to see Martin or Janet flying the Swedish flag if it came to it. I suspect the results won’t be quite what I want though…

Speaking of which, guess it’s time to watch that. God, they don’t give long to vote do they? I hope for Janet’s sake that votes are open from the performance time. Can Eddie speak Swedish, or is Gina just NEVER GIVING HIM A CHANCE TO SPEAK?

Outside the top 5 were my poor sexy Eddie, boring Elin and croaky Amanda. No great loss, but Eddie … 😦 6th place for him. I want Martin and Janet through then, so Andra Chansen isn’t a total bloodbath of songs I liked. I could deal with State of Drama in the final too.

After a boring-as-sin “Dancing with the stars” interlude and an unexplained dansband song that had something to do with gay marriage, the results come.

First through to the final is State of Drama. That’s fine, at least it wasn’t Ravaillacs. Off to Andra Chansen is Martin Rolinski… I guess thats as good as I could expect. He’s joined by Caroline af Ugglas. Bearable, and perhaps what I would’ve picked from the top 5.

But inevitably Sweden fucked up again, putting poor Janet Leon in the hateful 5th place, the same as her previous incarnation Charlotte Perrelli last year, with Ravaillacs going to the final. Sigh. About as far from my ideal result as it was possible to get. AGAIN!! Let’s just hope the final heat from Malmö makes me more hopefully. In the meantime I’m tempted to put some money on Norway to win.