Doesn’t it feel like forever since last year’s Melodifestivalen? Maybe it was the slightly muted response from the Swedophiles (what am I saying? They don’t do ‘slightly’!) about the quality of the 2013 entries, usually calculated by a quick tally of schlager queen tracks by MF career-failures. It seems like 2014 is looking to make up for that, and in MF circles this is a positively star-studded year.

To get you up to speed, Melodifestivalen is Sweden’s selection event for Eurovision. However in contrast to other national selection events, it’s a massive event, dwarfing even Eurovision itself. In Sweden, MF & ESC occupied 7 of the 8 of the list of 2013’s most-viewed shows with the MF final watched by nearly half of the population. Considering Eurovision was hosted in Sweden in 2013, it still ended up 7th on the list, behind MF’s finals and all the heats, with only second-chance Andra Chansen narrowly reaching a smaller audience.

So we have four heats on consecutive weekends across major venues in Sweden, starting in last year’s Eurovision host city Malmö, then on to Linköping, Göteborg and Örnsköldsvik. The 3rd & 4th placed acts from each heat will go to Lidköping for second-chance round Andra Chansen, fighting for the last 2 slots to join the heats’ 1st & 2nd placers in the final in Stockholm’s massive Friends Arena.

With me so far? So here we are in Malmö for the first heat, with what looks like a fairly cut-and-dry result for qualifiers, with last year’s 2nd place artist YOHIO back for revenge, with a song co-written by veteran runner-up Andreas Johnson. But there’s a bigger top-trump in the deck, namely a former Eurovision Winner, Sweden-born Helena Paparizou who won Greece its first victory in Kiev 2005 with “My Number One”. Could she do the same for Sweden?

Of course this could all go out of the window; there are 6 other hopefuls in the mix, and who knows what might happen? Lest we forget, Robin Stjernberg made history last year as the first act to win Melodifestivalen via Andra Chansen, so all bets are off. I’ll write this up as I watch it (sadly on SVT’s catchup service).

So here we are in Malmö, with comedians Nour el-Rafai and Anders Jansson on hosting duties for the first time. I LOVE those dramatic intros (are they still doing that Elvis gag in the titles?…), and a quick recap of last year’s event, as well as a funny little skit of the hosts watching the Eurovision final gets us up to speed. Not sure what they were typing about, but it evidently involves the burning of penny-whistles.

I wish I knew what was going on though, lots of chat, something about Loreen & Emmelie, and a hooded monk with a traffic cone. Totally lost on me. Let’s just get on with the music shall we, opening with a big name… 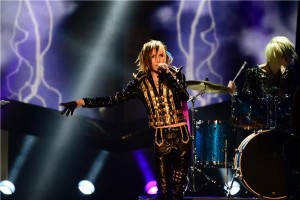 YOHIO – To the end – His 2nd place entry last year was alright, it was a bit of a naff 80s hair rock effort and I didn’t quite see the appeal. I’m interested to see what he comes up with though. This is much better though, it’s like a rockier version of that Ulrik Munther song last year. if anything it feels like a fairly generic MF euphoric dance track, but that’s a great improvement on hair rock at least.

I suppose it’s all relative though, it’s one of the favourites to win the whole thing, and without hearing any other songs, I can at least say it would be a decent entry.

Mahan Moin – Aleo – Those vocals are a bit shaky in the first verse, but the cracks are papered over as this dancepop football anthem picks up steam. WHAT is she singing about in those verses, what nonsense. Don’t fancy its chances but it’s a fun song that I’m sure will sound much better in its studio version. At least it’s better than “Gosa”

Linus Svenning – Bröder – The singer’s a bit scary, but this is written by MF overlord Fredrik Kempe whose ESC & MF credentials are too massive to even start listing. He’s got a song in each quarter-final, could he end up with 4 finalists? But enough about the writer.

A ballad, wasn’t ready for that! I guess it will be a lot more heartfelt if you know Swedish but they are pulling out all the stops with the audience getting involved with the lighting. It’s a slow burner but he’s got a strong enough voice not to get swamped in the big production. I don’t know what happened to his brother, if he died I feel like this is perhaps a bit emotionally manipulative. It’s decent but relies on too many things other than the song.

Elisa Lindström – Casanova – Another big name co-wrote this, Bobby Ljunggren. You can look him up on Wikipedia, but he’s won MF 5 times over his long career. Elisa’s no stranger to the stage either, but this is her first solo entry at MF.

Wow, this is Schlager through and through, what a throwback! Such a feelgood track, I really like this. I’m glad MF hasn’t totally abandoned Schlager at least. She perfoms well, though I wonder if she’s struggling to keep up a bit. Either way, love it! And that’s even before the key change and glitter cannons.

Alvaro Estrella – Bedroom – Oh hej Alvaro… a cute super-styled dancepop track I expect? Just need to see if it’s more Saade than Razaz. Sweat stains on the dancefloor? This is just “Moves like Jagger” isn’t it? How nice, it’s about fucking in different places in the house because they just couldn’t wait, how sweet!

It’s pretty naff, but he’s a confident performer and it’s a catchy song either way. I wonder if this could be a dark horse, it’s certainly one of the more instantly enjoyable tracks so far.

Ellen Benediktson – Songbird – Another debutante, apparently picked up by MF producer Christer in last year’s ESC where she was the stand-in singer for France. I guess that means for rehearsals? A Cinderella story anyway, I guess she must be good.

It sounds a bit like every other song called “Songbird” I’ve heard, but it’s very nice. An old-fashioned almost country ballad. Ballad fans have had slim pickings tonight so this could do well. It only starts to really make sense towards the end when she opens up the vocals a bit. She’s certainly got the vocals for the big stuff anyway, this is pretty good stuff!

Sylvester Schlegel – Bygdens Son – A debut solo entry for a former member of The Ark who represented Sweden in 2007. Not especially looking forward to this, “The worrying kind” was a decent track, especially in the context of the painful 2007 contest, but we’ll see.

It’s alright, a quirky 60s-tinged bit of pop-rock. A bit overstyled and desperate to stand out. It hasn’t quite got the hook of “The worrying kind” but it’s a decent track. I just hope he doesn’t qualify purely on his MF credentials – although we’ve seen in the past that’s no guarantee.

Helena Paparizou – Survivor – Finally the headliner, with perhaps the most to prove. Former Eurovision winner Helena also gets a Bobby Ljunggren co-write, and bizarrely walks on to the trills of Des’ree’s “Life”. A woman of taste! I suppose you have to wonder what she has to prove, anything less than a Eurovision win would be a step down I suppose. Or at least to some people.

She looks great though. Was this really the song to lure her back? She sings it really well, and you can tell she’s a seasoned performer. The song though is a fairly standard-issue Schlager power anthem, built around a title more than a strong lyrical idea. I hope she does well though, it certainly finishes with a bang, I just think the song lets her down a bit.

So there we are! The first eight songs, but only 4 will get through the night.

I wouldn’t bet against YOHIO making the final, the other slot isn’t so clear cut. There are plenty I’d like to see there. I wonder if Ellen might shock us as one of the few ballads. If that’s the case, I hope Helena and Alvaro make Andra Chansen. It’s only that Bröder song I don’t like out this heat.

They don’t give long to vote do they? Not sure what’s going on though, I guess there’s a lot of rivalry with Denmark, and they want Eurovision back. I’m sure SVT would probably have Eurovision every year if they were asked! What the hell is this Anders interlude about!?

This is a bit of a buildup for Elisa, she was in Lille Melodifestivalen (the junior version), and follows in the footsteps of Ulrik Munther and Molly Sanden who did well in the adult version afterwards. I hope she gets through after all that!

Who’s Clara? Is she the Linda Woodruff of 2014? It’s a bit of a clunky moment, that’s a lot of awkward silence… oh well, results now anyway (thank God). 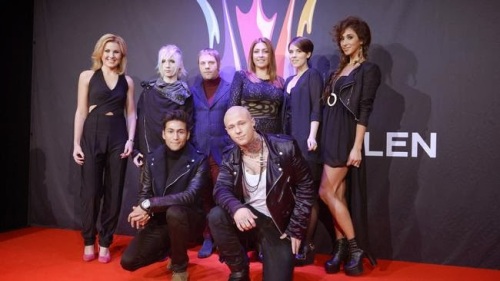 I have no idea what this first bit is about, are these the top 5? The 5th act reveal wasn’t very dramatic, it had to be YOHIO , right? Poor Alvaro though… 6th place. Last place for Sylvester too! Oops. SVT rinse some more votes out as the lines open for the top 5 again. Ugh I hope “Bröder” gets 5th place, but I think “Casanova” might end up with the wooden spoon. Or even dear Helena. Gah! Let’s see.

After those recaps I think I might be Team YOHIO this time around. Helena’s no sure thing but I think she defaults to my top 2 out of what’s left. But another skit now, taking the piss out of the Danish Eurovision committee. I’m sure it’s done with love.

So, the first “Direkt til Finalen” entry is… YOHIO! Thank goodness! We get a reprise performance too, which … erm, goes well. This could go all the way I think, I guess it doesn’t hurt that he won the public vote last year either.

The two Andra Chansen acts are… Linus (ugh) and Helena Paparizou. That leaves Elisa & Ellen for the last final qualifier … and with some inevitability it’s Ellen with her ballad. Poor Elisa, though I suppose it was always on the cards. I’m just glad songs like that are still entered.

Ellen is totally shocked though, what a nice moment. So that’s that! A decent set of results (Linus notwithstanding) and two great qualifiers. See you next week in Linköping!