I said I would get you up to speed, and that’s just what I’m going to do. It’s been an eventful month in my village, as a number of villagers decided to up sticks and leave. While I was tempted to keep them captive forever until they gave me their damn photos, but it seems they aren’t going to give them up no matter what I do. 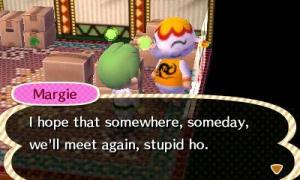 So with a tear, I bid goodbye to Margie the elephant. She moved to my nephew’s village, where she’s making friends by calling people “Stupid ho”. I miss her. But if you love someone, you have to let them go. Oddly though, Chadder – the mouse intriguingly made of cheese – has been loitering in my main street. He moved out months ago, but appears to living as a vagrant in the business hub of my village. I need some cat villagers. 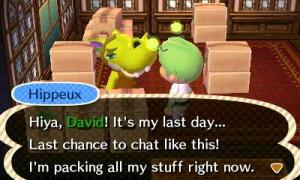 Also on the way out this month was Hippeux, who I had barely gotten to know before he wanted to leave. I didn’t mind so much, he’s a bit of a dick. What a weird name too, he wasn’t French or anything. There are a lot of nondescript villagers in AC:NL, definitely too many jocks too. Hippeux bucked that trend but never did anything interesting. Sort of wish it had been Curly though, I’ve been waiting for that douchebag to leave since forever. 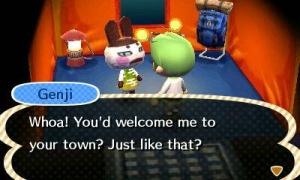 But it’s the circle of life, as two villagers left, two more came to join them. I still have a space, as it happens. Dammit I want Tangy! Or Julian the unicorn, or just some total freak, there are plenty of them going around. Genji seems like an odd character, rather gender non-specific too. I’m guessing from the jock-talk that it’s a guy. I’m hoping  he has a bunch of cool Japanese stuff, he keeps calling me Otaku, so I guess that’s a good sign. 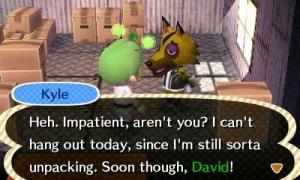 Who else… Kyle! He might not be a Wolfgang, but at least he’s not a jock. Kyle the wolf set up practically on my doorstep, but he seems quite sweet so I guess I can keep him. Just wish these new villagers would stop flattening my fruit trees though.

There’s one person I forgot was leaving, and that’s Nat the chameleon leader of the Bug Off. The final Bug Off was on Saturday, and while I sort of phoned it in a bit, I still managed to win the contest by a comfortable margin with an Agrias butterfly from the island. I got all the bug furniture apart from a Honeybee Chest, so close! I might be able to get that off a family member though, so I can complete my bug room at the back of my house. 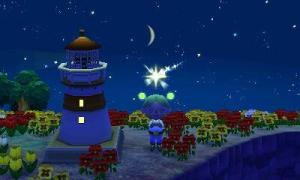 When you wish upon a star… who knows what crap you might get in the post. Wishy the lucky star smiles down on you if you press “A” during a meteor shower, so make sure you don’t have any tools in your hands. The next day he sends you an item (1 per day). I don’t know quite where a meteor gets a shopping trolley from, but now I have one. I might dump it in the river. 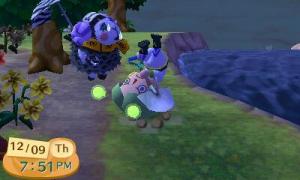 But not before I catch some damn salmon. There is only a week left to catch the salmon, king salmon and scorpion before they hibernate or whatever they do. MUST DO IT. Fortunately my river fishing hasn’t been a total waste, I seem to be inundated with fabulously expensive Dorado.

Speaking of elusive catches, a golden slingshot (like I give a shit about slingshots) drifted by the other day. I need to carry my slingshot around all day until I get that damn thing, it’s annoying that they vanish if you go indoors to get it. I’ll bide my time though. 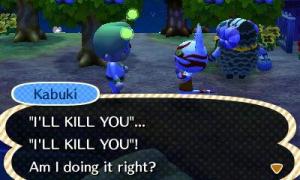 Other than that, and an increasingly worrying Kabuki, things are pretty much as they ever were in my village. I need to chop some trees down now I’ve got enough Jacob’s ladders to flank my house nicely, and my renewed mission to get some kick-ass hybrids continues. What a whirlwind….