Right, only a quick one today because I’ll be catching a taxi to the coach station shortly. I’m off on holiday. It seems like it’s not been that long since Malmö – I guess it hasn’t, that was only 6 weeks ago. 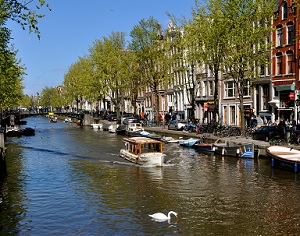 But despite it seeming like a terrible time to take annual leave from work, the next few months are only going to get worse, and this is the only chance I have to go anywhere before the end of September. I guess that won’t feel like such a depressing prospect when I get back in July.

Yes anyway, I’m going to Amsterdam. I haven’t been before – or if I have, it was only on a technicality at a hotel-conference centre for my previous job. My dad took me to Rotterdam when I was about 14, but that with his work – not exactly the glamorous holiday, but I was excited at the time. Amsterdam’s supposed to be really nice though.

No hookers & hash for me though. I’m too clean-cut. I am sort of tempted by one of the brownies but I’m too much of a pussy, I’m bad enough if I go to a new bar and I don’t know where the toilet is. And what if I liked it? Being a stoner isn’t exactly the turnaround my life needed (even if I do need to chill out a bit). I have Animal Crossing for that now, it sedates my brain just fine, thanks.

So I’ll take in the museums, the canals, and whatever else my guidebook recommends I suppose. I’ll be back on Wednesday. I’ve pre-blogged a few bits though, I need to finally count down the rest of my Eurovision stuff so I can finally put that to bed. Talk about a hangover…

Tagged as amsterdam, back soon, on holiday