It’s been a little while since I did anything Eurovision-related, so it’s time for me to have a long-delayed retrospective of Turkey’s first hosting of the Eurovision Song Contest. Turkey themselves debuted at the contest in 1975, and had never enjoyed great success at the show, perhaps hobbled by the requirement to send songs in the native language.

That said, the tide hadn’t turned noticeably after this rule was relaxed in 1999, so it was a bolt from the blue when Turkey – after only 3 top finishes previously – took the victory in Riga with its 25th entry. It was one of the closest victories in recent history too, snatching the win from Belgium with the last set of votes. Belgium have never really been the same since, but Turkey have gone from strength to strength.

While they haven’t won since, Turkey have spent most of the time since in the top 10, almost dead certs for semi-final qualification (that were introduced for Istanbul’s 2004 contest), appearing at all the finals bar one (in 2011). They even challenged for a 2010 win in Oslo but couldn’t get close to Germany. Germany shouldn’t feel bad, they are the biggest donors of points to Turkey along with other Western European countries like France, Belgium and Netherlands with large migrant worker populations from Turkey.

The Istanbul show was a pretty lavish affair, even if the presenting style was… interesting. But what about the songs? Well I’ll get to the point now, as I start to count down the songs one by one, starting with my least favourite six. 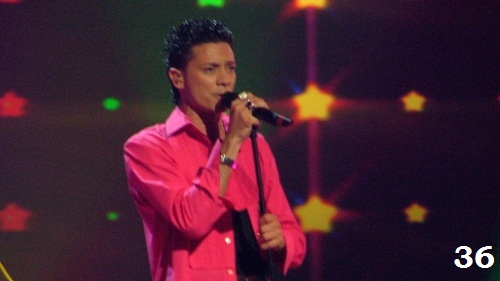 Piero and the MusicStars – Celebrate

Did not qualify, #22 in Semi-final

Oh Switzerland, what are you like? Totally hopeless for large chunks of the last decade, and always have a bit of an identity crisis. What is a Swiss sound? They don’t seem to have decided, and until they work it out, they have been kept out of most grand finals since 2004. This cringey track was no exception, totally inane lyrics, annoyingly dated calypso-lite music. It’s like something from a kid’s TV show isn’t it? Fortunately I wasn’t alone in thinking this, and they got nowhere near the final. 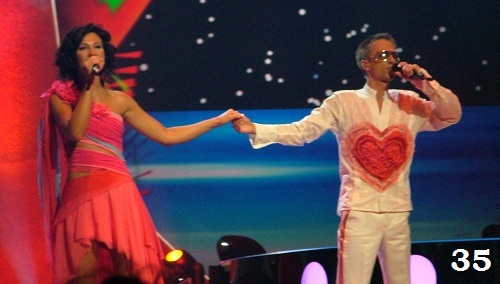 Linas and Simona – What’s Happened To Your Love?

Did not qualify, #16 in Semi-final

Lithuania were having similar concerns about what sound to present to the continent. After all, what do you think of when you imagine the Lithuanian music scene? My feeling is that a vaguely uptempo latin number is not what you came up with.

Maybe at this point in the contest, traditional music hadn’t generated a big winner in the recent past (maybe Ruslana was to change that in this contest), so you can’t blame them for at least attempting some sort of pan-European melee. The harmonies are really weird, I don’t like their voices at all, and the song’s quite annoying too. Never mind.

Did not qualify, #15 in Semi-final

Oh Portugal, I can always depend on Portugal for sending something dead on arrival. OK that’s a bit harsh, but 46 entries without even a top 5 finish and you have to wonder. Is she singing about Fukushima? Perhaps not. At least they’ve got for something upbeat, and I can’t really criticise it for being a bit dated, because it’s 8 years old already. Again the harmonies just don’t work for me at all, she looked the part but there’s just something missing.

#8 in the Grand Final

The Germans hadn’t reinvented themselves as the darlings of the Big Four by this point. But conversely the Big Four status wasn’t Eurovision poison either (though you could argue UK were already in their shallow grave after 2003’s infamous nul points disaster). How this managed to get a top 10 finish is beyond me, but I could imagine people liking it if they are into sort of easy-listening cheesy jazz. Sounds like something off 1970s Top of the Pops, 1980s if I’m generous. Does nothing for me sadly.

Ahh memories, probably the last time Netherlands got a decent result (ish). Since then they haven’t qualified for a single grand final despite eight attempts. When I first heard this, I expected to see a boyband, but instead we got a rather greasy-haired duo, with nice voices but the whole stool-sitting guitar-strumming midtempo idea was difficult to get excited about.

Harmonies are quite nice though, and I can certainly see the appeal. I do despair for Netherlands though, who have repeatedly sent some great entries but never make it through. They are no angels, there are certainly some stinkers in that selection, but still.

Did not qualify, #18 in Semi-final

Before I finish the bottom six, we are slowly emerging into the songs that I don’t really mind that much at all. Andorra never had a great time at Eurovision, and this marked their debut in the contest. They were never to qualify for a final, and bowed out after failure in 2009. With their national broadcaster threatening to pull out of the EBU (which didn’t happen in the end), I won’t hold my breath for a Eurovision comeback anytime soon.

Anyway I digress, Marta had a nice enough uptempo pop song, very light and frothy, it’s just totally impossible to sing along to that chorus. It’s just a endless string of syllables, where do you start! It’s got a nice energy but not really a standout track. It’s a shame they never qualified, having even less luck with Catalan than the Portuguese did. Maybe the songs just weren’t that good…